2. What are you looking to work on?

Archive of the 'Overriding Default FOSUserBundle Templates' page which was unfortunately deleted from the Symfony website in mid 2016 and has now been republished by internet recovery program at Lolly Co.

As you start to incorporate FOSUserBundle into your application, you will probably find that you need to override the default templates that are provided by the bundle. Although the template names are not configurable, the Symfony framework provides two ways to override the templates of a bundle.

It is highly recommended that you override the Resources/views/layout.html.twig template so that the pages provided by the FOSUserBundle have a similar look and feel to the rest of your application. An example of overriding this layout template is demonstrated below using both of the overriding options listed above. 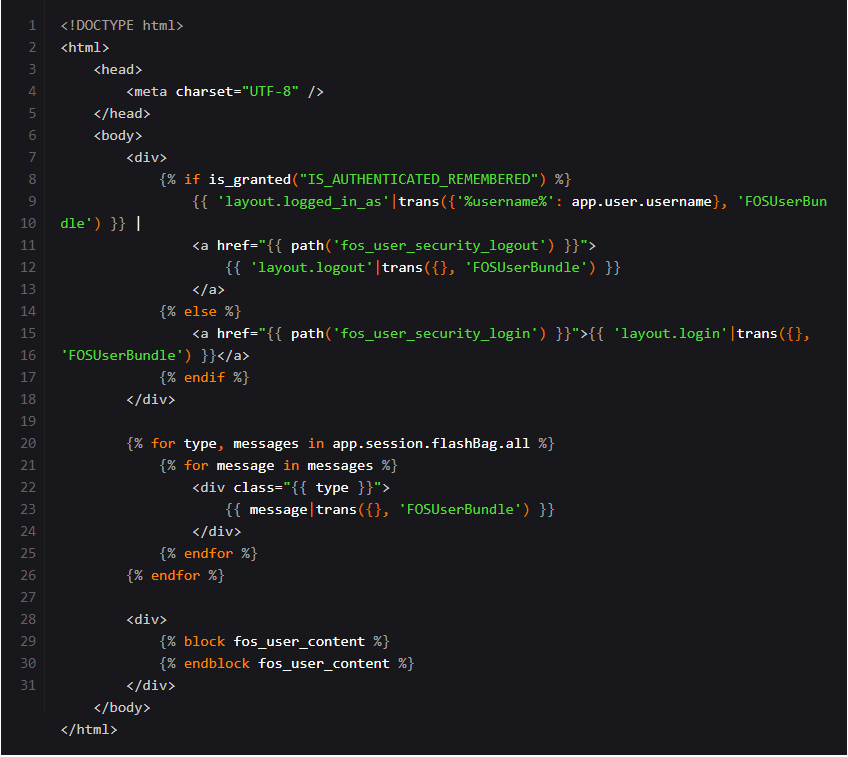 As you can see its pretty basic and doesn't really have much structure, so you will want to replace it with a layout file that is appropriate for your application. The main thing to note in this template is the block named fos_user_content. This is the block where the content from each of the different bundle's actions will be displayed, so you must make sure to include this block in the layout file you will use to override the default one.

The following Twig template file is an example of a layout file that might be used to override the one provided by the bundle.

This example extends the layout template from the layout of your app. The content block is where the main content of each page is rendered. This is why the fos_user_content block has been placed inside of it. This will lead to the desired effect of having the output from the FOSUserBundle actions integrated into our applications layout, preserving the look and feel of the application.

a) Define New Template In app/Resources

As you can see the pattern for overriding templates in this way is to create a folder with the name of the bundle class in the app/Resources directory. Then add your new template to this folder, preserving the directory structure from the original bundle.

b) Create A Child Bundle And Override Template

This method is more complicated than the one outlined above. Unless you are planning to override the controllers as well as the templates, it is recommended that you use the other method.

As listed above, you can also create a bundle defined as child of FOSUserBundle and place the new template in the same location that is resides in the FOSUserBundle. The first thing you want to do is override the getParent method to your bundle class.

By returning the name of the bundle in the getParent method of your bundle class, you are telling the Symfony Framework that your bundle is a child of the FOSUserBundle.

Now that you have declared your bundle as a child of the FOSUserBundle, you can override the parent bundle's templates. To override the layout template, simply create a new file in the src/Acme/UserBundle/Resources/views directory named layout.html.twig. Notice how this file resides in the same exact path relative to the bundle directory as it does in the FOSUserBundle.

After overriding a template in your child bundle, you must clear the cache for the override to take effect, even in a development environment.

Overriding all of the other templates provided by the FOSUserBundle can be done in a similar fashion using either of the two methods shown in this document.

Join global leaders who depend on Lolly Co to transform their businesses with advanced technology & automation.